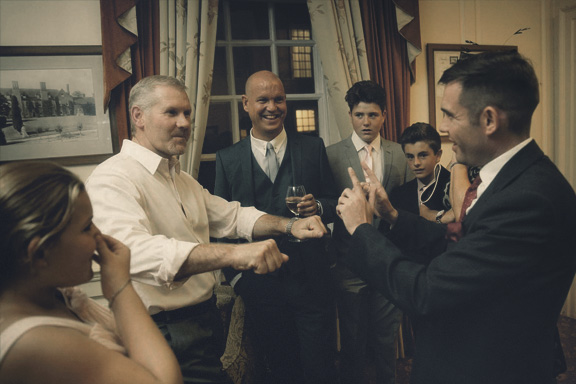 Search Google for ‘magician Surrey‘ and a whole load of results pop up. The same goes wherever in the country you search. Magic is big business. In a country where fewer people follow organised religion than ever before, the role of magic is a fascinating one, and our love of it is apparently down to human beings being hard-wired for mystical thinking.

You are hard-wired for magic

Ask any neuroscientist. Magical thinking has important implications for humanity’s understanding of consciousness. It explains why so many of us believe in gods, spirits and ghosts, and why we are universally delighted with sleight of hand, keen to be convinced there really is such a thing as magic.

Take Dr Andrew Newberg, Director of Research at the Myrna Brind Center for Integrative Medicine. He has long been interested by the profound significance of human faith, and its power, and has actually tried to measure it. Using a technique called single photon emission computed tomography, where a person is injected with a chemical that gives off gamma rays, he has created images of the way blood flows to various parts of the brain, and found that the more blood flows to a region, the more brain activity is going on.

When he observed Franciscan nuns praying, Tibetan monks meditating and Pentecostals speaking in tongues, Newberg discovered that religious feelings make the lobes of the brain work together to create a dramatic and potent emotional experience. People don’t feel that they’re making it happen, they feel strongly that they’re being overcome by the experience, that it is being controlled by a greater power.

It looks like this happens because people automatically shut down large parts of the activity in their conscious brain to allow the experience of transcendence. Our brains actually change while we’re engaged in this kind of powerful spiritual practice, and the way our brains are constructed seems to make it unusually easy for humans to have spiritual experiences.

We are obsessed with finding patterns, and the reasons behind things

Humans are seekers of knowledge. We search for reasons why things happen, and if there isn’t an immediately apparent cause, we head straight for magical thinking. When there’s a gap, we fill it. And if there’s no rational explanation, we’ll settle for an irrational one: the pattern burned into your piece of toast might look just like Buddha, for example.

Things like this never happen at random. There’s always an evolutionary benefit to the things our brains do. So what might the benefits of spirituality, of believing in magic, be?

The theory goes like this: it’s the repetition of a ritual, not its content, that gives it power. It doesn’t matter whether a person thinks something, chants it or reads it. Either way we achieve a transcendent state by practising, by strengthening the brain’s connections. And this means that simple rituals can actually improve your mental health, helping you cope with life, the universe and everything whether or not you believe in deities or follow a formal religion.

Reacting to weird and unexpected events is also a great survival strategy in a world where unusual sounds, sights and events could easily kill us. The people who took action when spotting something unusual – for example a leopard hidden in the grass – were more likely to survive and pass on their genes to the next generation, whereas people who ignored the signs or didn’t notice them in the first place were more likely to get eaten. These vital instincts are now hard wired into our brains, and we still automatically think magically even though today’s sophisticated, wealthy western world is safer than ever before.

And the good news is…

Magical thinking doesn’t hold us back. The fact that we think luck and supernatural forces are real, that objects have power, that symbols make things happen, is part of what makes us such a success as a species.

Believing in magic is good for us. So next time there’s an occasion on the cards that you’d like to spice up with some magic, sleight of hand and mind-reading, get in touch and I’ll make sure your guests, audience, family or colleagues have the most magical time possible. If you’re looking for a magician in Surrey, hey presto, you’ve found one!