A couple of weeks ago I was hired to perform for a group of psychologists at a conference in Surrey. They wanted  me to demonstrate the more psychological aspects of mentalism. This is an ideal booking for me as a common term for what I do is psychological illusionist, although I prefer the more mysterious Mind Reader! A large number of my routines rely to an extent on psychological principles, and where they don’t I can pretend they do and see if the psychologists can figure out which is genuine and which is not.

I decided to start with a test for the entire audience and thought I’d try something new, here’s what I used……..take a look at the image below, once you’ve looked at it try to reconstruct the image in your mind. 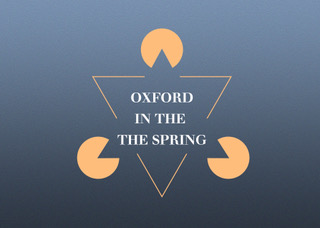 Most people (I include myself in this when I first saw it) believe they have read the words “Oxford in The Spring” with the text on two superimposed triangles. Most people would be wrong. The text actually says Oxford in the THE (thats 2 x The) spring and it’s actually 3 V shapes. This is known as an illusion of omission and demonstrates that simply looking at something does not result in noticing.

This particular image was taken from the rather fabulous The Spectacle of Illusion by Matthew Tompkins, written in conjunction with the exhibition The Psychology of Magic at the Wellcome collection which I heartily recommend everyone go and see, it’s fabulous.

Edward is a professional mind meddler, better known as a mentalist or a mind magician. In this particular instance he was working as a Surrey magician but can be found performing throughout the world. Check out the links above for more details.